After 19 years as a youth pastor and with the encouragement of family and friends, Rick Abma took a leap of faith about three years ago and became a full time missionary to his neighbours in Lacombe Alberta. Rick challenges Christians tofollow God’s command to love our neighbours by meeting them where they are at. He practices what he preaches in his neighbourhood and has facilitated training for communities and churches in Lacombe, Lacombe County, Red Deer, Sylvan Lake, St. Albert and Terrace, BC. Rick recently published a book, Neighbouring for Life, which is filled with stories about how neighbours made a difference by showing God’s love to each other.

Prior to going to seminary, Rick was a radio DJ and still hosts a radio program on Sunny 94 FM in Lacombe. Rick enjoys windsurfing on Gull Lake and cheering for his beloved hockey team, the Vancouver Canucks. Rick is a former Dordt College roommate of Jim Hummel.

To support his ministry, Rick imports Rio Olancho Direct Trade Coffee beans from Honduras which are produced by about 50 Honduran farmers in community driven arrangements. Farmers are paid fair wages and practice environmentally responsible ‘shade grown’ practices producing coffee that is organic, certified ethical and traded fairly. Earlier this year, a group of his friends launched Good Neighbour Coffee House in Lacombe to further support Rick’s ministry. Rick is supported by his wife Joyce and his four children. For more information, check out www.goodneighbourcoffee.ca. 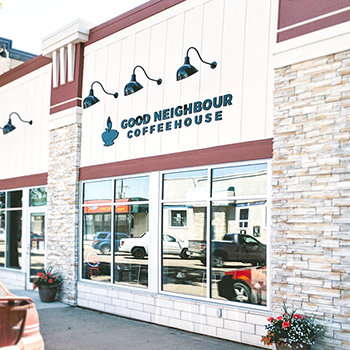